All this moving malarkey has taken up an awful lot of time hence it's been a bit quiet on both the sewing and blogging front, but I'm hoping to get back into the swing of things. We've pretty much moved and settled into our new place which is fab. Still a few things to figure out, like where my sewing machine will live, but I'm sure it'll find a perfect place given some time.

I have managed some sewing even with the packing, sorting, and other chaos around. I made another Colette Laurel, this time a sleeveless dress with fringe. And yes, it's a supposed to be a flapper girl dress, otherwise fringe might be a bit much. I'll admit it was a bit quick and dirty dress as we had a Gatsby themed party to attend and I had nothing to wear. I ended up sewing the last fringes on train on our there, but better late than never? 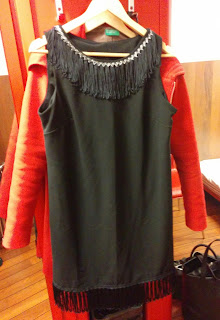 I added some silver to the bottom after this photo was taken. I could have easily continued adding bits to the dress for another few hours, but it's probably for the best that I had to stop, hand-stitching beads would have been too much ... Though I did see some amazing outfits on the night, I ended up feeling a tad under-dressed even with the fringe.

I used the pattern with the same modifications that used for the Laurel top I made just before Christmas. For some reason the dress was huge when I first sewed together. I had to take the side seams in half on inch both sides and it still could have been a bit tighter. I know I hadn't lost any weight at that point so I'm a bit baffled as to what happened. I think I'll need to redraw the pattern as I am going to make another Laurel for the summer.

For some reason all the pics from the actual night are a bit so and so and you can't really see the dress in detail, but here's a few anyway. 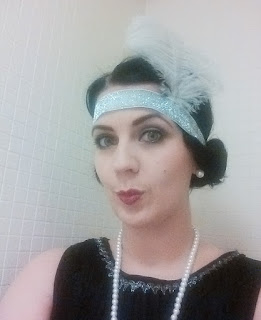 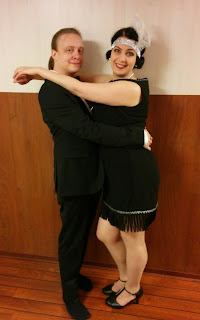 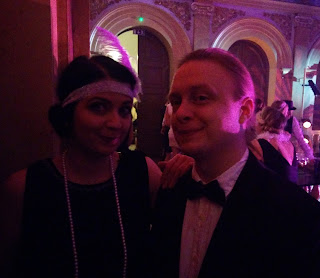 The party was much fun, we danced Charleston til our feet hurt and had a few glasses of bubbly, just like real flappers. I'm all for themed parties these days.

I have some sewing planned for tomorrow so hopefully my next update won't be such a long way away. Over&out for now dear readers!
Posted by Essi P at 00:08 No comments:

Most of you are probably familiar with Vintage Pledge that Marie from A Stitching Odyssey and Kerry from Kestrel Makes are hosting for the third year running. In short it's a sewing challenge that encourages all of us to use our vintage or re-production patterns from our stash. I've followed the vintage pledge previous years, but I felt that my skills weren't quite there to tackle vintage patterns yet so instead I just admired all the lovely makes (and there are plenty).

This year I'm throwing caution to the wind and joining in. I have a few amazing vintage patterns in my stash and I may have bought another one a few weeks back from Vapriikki's vintage market. It's about time I used these patterns rather than just admire in my drawer. So here goes:

I, Essi P. pledge to make at least two dresses from my vintage pattern stash during 2016.

Hope some of you join in and happy pledging dear readers!
Posted by Essi P at 23:07 No comments:

I was so lazy with sewing and blogging last year that I'm not going to do a top five post and I think I'm going to continue with last long list of sewing this year so no sewlutions or re-caps here. Instead I thought I'd show you the glittery dinosaurs I made just before Christmas!

The dino-thing all started some time last year when I saw a dinosaur planter on Pinterest/Etsy. I was going to order a few planters on Etsy (as apparently I'm not allowed to use a carpet knife after the carpet knife incident...), but one company didn't ship to Finland and the other one seller didn't have the right colours so I left it for a while and forgot about it. Then dinosaurs came up a few months ago at work (I have no idea why) so I did some searching and soon found several tutorials for all things dinosaur. Here are a few of my current faves:  Checks and Spots' turorial for planters, Three little monkey studios tutorial for an awesome serving dish and Chris Gardner's tutorial for sparkly dinos.

It was surprisingly difficult to find suitable toy dinosaurs so the servings dish and planters are still only plans, but I did find some small dinosaurs suitable for Christmas decorations. Yay. We did some Christmas crafting with my sewing/craft club so it was a perfect opportunity to start on the dinos. I loosely followed the tutorial but I ended up using acrylic paints instead of spray paint as it is less messy. I also painted the dinosaurs first and the added a layer of glue and glitter. 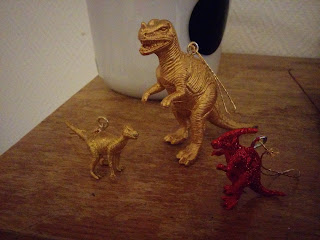 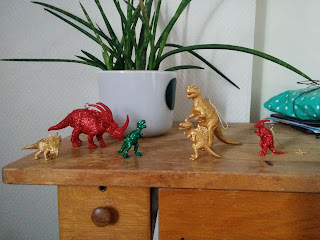 Hope you all enjoyed your holidays and happy new year! I will do more sewing this year even without the sewlutions, promise ,)

Long time no see dear readers! I've not disappeared off the face of the earth even if it might seem so. I've just been in a sewing slump for what seems like forever, (well I did make a red bow and quick&dirty sequin top for a Rocky Horror Picture Show evening, but they really don't count). I've also had a super-busy autumn, and leading up to Chrimbo has been pretty manic too. I've mainly spent all of my free time wall-papering & decorating (see pics on Instagram!) as we bought a new place! I will post more pics (if and) when we move, but that's still a few weeks away.

This week finally saw me return to sewing and I made my first Laurel! And it seems to have got me from my sewing slump, hurrah! It's not the best thing I've made, but it's defo wearable and probably the first of many Laurels I'll be making. 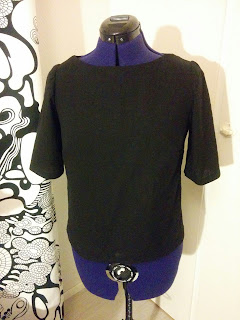 I'm in-between sizes (who isn't though) so I did some mixing and matching while drawing the pattern. This seemed to work quite well until I fitted the blouse and decided to take the shoulders up a bit which resulted in the bust dart being too high up, dur. I was going to ignore it and keep this as a wearable mock-up, but after looking at it for a while I decided to dig out my old friend the seam ripper and redo the front. Luckily I had extra fabric to do so. This was a bit disheartening, but I doubt I would have ever worn the supposedly wearable mock-up so I'm glad I did put in the extra effort, even if it did mean the poor garment sat in my UFO pile for a month or three ...

I got this adorable dotty bias binding from my friend for Christmas last year so it was about high time I used it. I think it gives the garment a chic touch. The bias binding worked well on the arms, but I had a few hiccups with the neckline, which resulted in more unpicking, so I drafted a facing for the collar instead. I suspect I'll do that in the future as I'm not a huge fan of hand stitching and I can't seem to get the bias binding to lie flat if I do it with a machine. 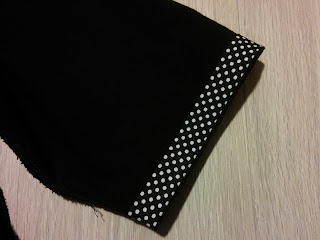 I'm also thinking Laurel would look pretty neat with a collar. I have a few funky fabrics in store so that may well be my next project, I'm all about quick and easy at the moment.  Hope your autumn hasn't been quite so unproductive as mine! Over&out for now dear readers.
Posted by Essi P at 15:52 No comments:

Gosh where does the time go? I can't believe its end of July already. I've been super-lazy with sewing recently, life has been getting in the way, busy at work, family things, planning moving house (though that's still to come) and all the rest. I have stacks of beautiful fabrics and patterns waiting, I just need to to get started. In fact I think there's too many cause I can't decide what to start with, does anyone else get that or is it just me?

I was in London and Glasgow for work at the end of June (which was fab!) and oh boy do I miss the UK. All the lovely sewing magazines, fab fabric stores and obviously all the buzz that has spread from the Great British Sewing Bee. Talking of which do you my dear readers watch it? I've still not watched series 3, it's on my to-do-list, maybe when I'm on hols next week ...

I did once again end up buying a pattern even though I'm not supposed to, but Tilly's Ariel skirt is just too cute to resist. I think I'd quite like a red one for the autumn (or for the non-existent summer we're having here!) I'm a bit miffed that Bettine pattern only came after I'd come home otherwise I would have bought too, see no self-control I tell you. And I might have bought a copy of Love Sewing magazine as it had a cute tea dress pattern included...Ooopss. I fell in love with the John Lewis haberdashery section in Glagsow, who wouldn't want a pink sewing machine? 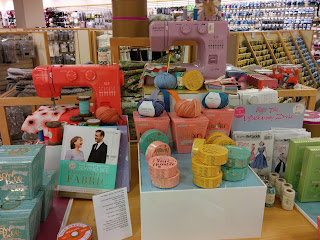 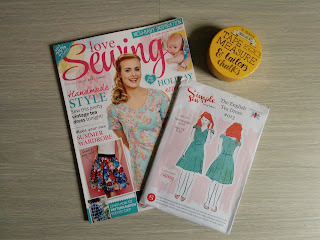 We're off to Tallinn coming weekend I've heard that they have amazing fabric stores there, I may need to visit one or three. Any recommendations dear readers? Anyhow that's all for now, I'm going to go dust my poor neglected sewing machine now. Hope you're having a more productive summer than me!
Posted by Essi P at 19:13 2 comments:

Essi P
A simple complicated gal in her early 30s with interest in alternative/vintage fashion, sewing, knitting, crafts and all things polka dot.